The Growers provides Non-GMO Watermelons to thirsty families across Ontario. Every year, we produce 600 acres of seedless and seeded watermelons. But have you ever wondered where the watermelon came from before it landed in your picnic basket?

It might surprise you to learn that the watermelon is already 5,000 years old. Archeologists found watermelon seeds among other artifacts in a 5,000 year old settlement in Libya! Even Kin Tut’s tomb had some seeds naturally preserved in his magnificent tomb. Horticulturalists have made it their career’s work to research the transformation of the watermelon from a bitter fruit with a hard, pale green flesh to the sweet, juicy delightful fruit that it is today. Mark Twain is known to have said that to taste a watermelon is to know “what the angels eat.” High praise for any food! 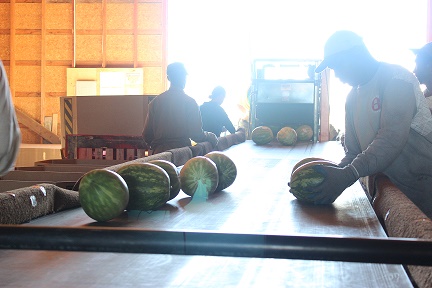 According to research on this fruit, experts agree that the watermelon was first grown in Africa before it made it’s way to Mediterranean countries and later Europe. However, this is all we know for sure. From here, the history of the watermelon is a little less pinned down.

One theory suggests that an ancestor of the modern day watermelon is the citron melon, which grows in southern Africa. However, contrary evidence suggests that the Egyptians were growing their own watermelons 4,000 years ago, predating the crop in southern Africa. Much of the research surrounding the origin of the watermelon is based on art and texts from around the world that have been carefully analyzed and interpreted.

Another possible ancestor is the egusi melon which is from western Africa. Yet, the hold up with this theory is that the egusi melon was cultivated for its edible seeds instead of its sweet flesh. The most compelling theory according to Harry Paris, an expert horticulturalist, is the citrullus lanatus var. Colocynthoides (also known as gurum, or gurma) which is found in northeast Africa. These melons did and still do grow wild in the deserts of Egypt and Sudan.

It’s incredibly interesting to note that watermelons were not grown for their sweet taste. In fact,thousands of years ago these watermelon predecessors tasted bitter, or bland. It wasn’t until thousands of years later that their appetizing sweetness was cultivated. Instead, they were grown as a source of water! Unlike most fruit, even the first ever watermelons were able to keep in a cool, dark place for weeks, and could be relied on when water stores diminished during the heat of the summer. It was the Egyptians who were responsible for breeding out the bitter gene of the watermelon, getting it one step closer to the sweet, tasty fruit it is today!

It was this same ability to act as a source of clean drinking water that brought the watermelon to Europe via trade routes, and long voyages at sea. Through both texts and artwork, historians have learned that the watermelon was respected as both an elixir of health (as a diuretic and treatment for children against heatstroke), and as a necessity of life. Today, we love watermelons for their refreshing sweet taste! A taste that his steeped in thousands of years of history! Delicious!